India has the highest number of cervical cancer- IARC 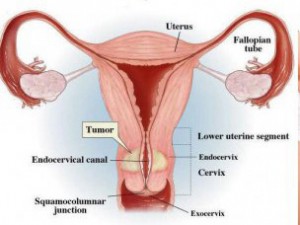 India has the highest number of cervical cancer in the world according to the International Agency of Research on Cancer (IARC), a part of the world health organization (WHO). Carcinoma of cervix is the most frequent of all the genital tracts Cancers, and after the breast, the second most common site of malignancy in female body. It is due to the abnormal growth of cells that have the ability to invade or spread to other parts of the body. Worldwide, cervical cancer is both the fourth-most common cause of cancer and the fourth-most common cause of death from cancer in women. But, India has the highest number.

The cervix is the lower part of the uterus (womb). It is sometimes called the uterine cervix. The cervix connects the body of the uterus to the vagina (birth canal). The 2 main types of cells covering the cervix are squamous cells (on the ectocervix) and glandular cells (on the endocervix). The place where the two cell types meet is called the transformation zone. Most cervical cancer starts in the transformation zone. These cells do not suddenly change into cancer. Instead, the normal cells of the cervix first gradually develop precancerous changes that turn into cancer.

Early on, typically no symptoms are seen. Later symptoms may include abnormal vaginal bleeding, pelvic pain, or pain during sexual intercourse. While bleeding after sex may not be serious, it may also indicate the presence of cervical cancer. HPV-the virus called human papilloma virus which infects mostly women causes the disease. The virus gets transmitted through sexual contact and even preventive measures like contraceptive cannot prevent it from entering a woman’s body. From infection, the virus takes 15-20 years to develop and attack as cervical cancer in woman’s body. High risk HPV types-16 and 18, cause 2/3 of cervical cancer. Low risk HPV type- 6 and 11. Other risk factors include smoking, a weak immune system, birth control pills, starting sex at a young age, and having many sexual partners, but these are less important.

About 90% of cervical cancer cases are squamous cell carcinomas, 10% are adenocarcinoma, and a small number are other types. Diagnosis is typically by cervical screening followed by a biopsy. Medical imaging is then done to determine whether or not the cancer has spread. Cervical cancer screening using the Pap smear or acetic acid can identify precancerous changes which when treated can prevent the development of cancer.

It can be treated through

Dr. Bandita Sinha, Consultant gynaecologist & Fertility Specialist, Apollo Clinic says that the best way to prevent this is to make pap smear test mandatory to every women once in a year.

User rating: 0.00% ( 0
votes )
Four year child from Nigeria gets new lease of life through cellular therapy ‘To work for the betterment of society is my dream’- Amarja Chavan