Complementary feeding for your baby 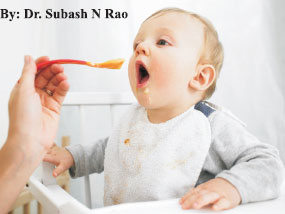 Complementary feeding means gradual transition from breastfeeding to full diet by making the baby accustom to food other than milk.

It is NOT a replacement for milk when started.

Complementary feeding should be attempted around 6 months of age

Not later than 8 months as

How to start Complementary feeding?

At what frequency to give?

What food to give?

Mashed rice and dal, sabudana or rice khichadi. Mashed boiled vegetables like carrot, cabbage, beetroot and leafy vegetables can be added to it later.

Ready-made baby foods can be given though NOT a must.

Give everything cooked at home.

Milk upto half a litre a day.