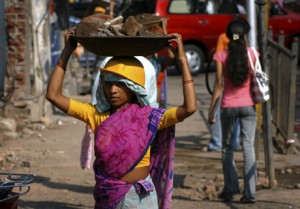 For a country like India where more than half the population live below the poverty line and where most of the industries even in the new millennium are labour intensive units, ‘May 1st’ or Labour Day has a special significance. At least on this day, governments, state or central per force or in a bid to gain popularity, do announce a few welfare schemes for the labourers. If not on all 365 days in a year, at least on this particular day, the heart of the labour union leaders and politicians appear to beat for the labourers and their welfare. But unfortunately, this day does not carry any meaning for the people for whom it is meant. Rather the day reminds them as yet another day when works would be stopped and they shall be missing their daily wages and hence their daily bread.
It would of course be incorrect to say that the government has done nothing for the labourers during these years of independence. However, most of the government schemes for the welfare of labourers are confined to organized sectors only. As a result the majority, who are employed in unorganized sectors, are unable to reap the benefits and their condition remains deplorable. The on-going economic recession has further aggravated the problems of the labourers. On one hand, finding a job has become the most difficult task and on the other, prices of essential commodities are skyrocketing making it extremely difficult to make both ends meet. The closure of factories and mills has further added to the problem of livelihood of labourers. All this ultimately leads to exploitation of labourers, who for the survival get into a job which gives them even less than minimum daily wages fixed by the Central/State government.
Another ugly face of human civilization that continues till today is bonded labour and child labour. Though this has come down drastically in the last few years, especially because of the role of NGO’s human rights organizations etc., still lot remains to be done in this direction. It is estimated that more than 18 million children work in various traders in our country. Some of them, especially those employed in the glass or cracker factories, work in the most inhumane, unhygienic and hazardous condition. For such section of people neither ‘Labour Day’ nor ‘welfare schemes’ hold any meaning.
What probably is required is multi pronged approach with special emphasis on eradicating child labour as well as on improving the working conditions of the existing child workers and strengthening their educational base. For the economic development of the country, it is highly essential that the living and working conditions of the labourers are improved. This will automatically improve the capacity utilization, efficiency and productivity. In India there is no dearth of legal provisions on any aspect of labour and employment. But these are not rigorously implemented. Various measures like incentives or motivation need to be adopted for enhancing the performance of the enforcement department. It should be borne in mind that labourers are also human beings who need to be respected and treated well. For after all, behind every visible finished product and creation, is the sweet and blood of the labourers.