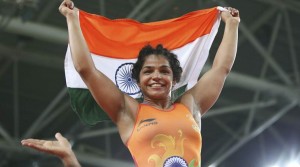 India’s Sakshi Malik won a bronze medal in the wrestling 58kg category after the Indian beat Aisuluu Tynybekova 8-5 in the bronze medal bout. In a thrilling contest, Sakshi fought back from 0-5 down to seal the bout 8-5 in her favour. With seconds left on the clock, she produced a three-point move to seal the bout and India’s first medal at Rio 2016 Olympics.

It wasn’t an ideal start for the 23-year-old as she conceded a five-point lead early in the contest, and like in three out of the four bouts earlier in the day, she was back from behind to produce the moves when they mattered, and seal the win.

Tynybekova started on a positive note as her leg-grab put her in the lead. She repeated the move again and sat in a comfortable position. Malik opened the scoring in the second period of the bout when she pushed her opponent down and out of the mat. She hit back with a similar move to reduce the deficit to just one point.

With scores locked at 5-5, and only seconds to go, Malik managed to steal three points and erupted in joy after a review from the Tynybekova corner didn’t make any difference to the scoring.

Earlier, Malik reached the Repechage rounds of the women’s freestyle 58kg event and made most of the second life as she outplayed Mongolian wrestler Orkhon in the Rd 2 contest 12-3 to advance to the bronze-medal match.

It was a convincing performance by the Indian as she took the early lead and kept the Mongolian under pressure with smart moves. There was a brief moment early in the first period where Sakshi lost balance and allowed her opponent to make most of it, but apart from that she was in complete control of proceedings.

Malik got another chance at a medal after her quarterfinal opponent Valeria Koblova reached the gold medal match.

In the quarterfinal, Malik was easily trumped by the superior and much quicker Koblova to lose 9-2. And crash out of contention for a gold or a silver medal.

In her Round of 16 match, Sakshi beat Moldova’s Mariana Cherdivara on the back of a bigger point margin in a single move after both were locked at 5-5. And in the opener, Sakshi produced a scintillating turnaround from 0-4 down to win 5-4 with her final two points coming in the closing stages of the contest.