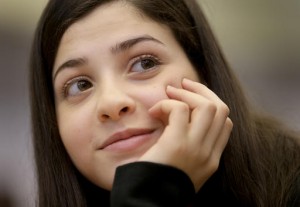 It is said that if one quits when things get tough, it gets that much easier to quit the next time. On the other hand, if one forces oneself to push through it, the grit begins to grow in you.

This is exactly what Yusra Mardini believed in. This 18 year old who participated in Rio Olympics in 2016 representing “No Country” had lost everything in the war. Yet through sheer grit, zeal and determination, she not only took advanced coaching in swimming but was a part of 10 member team, playing as “Refugee Camp”, under the Olympic flag. Yusra competed in the 100 meter butterfly and free style swimming competition in Rio.
Yusra had run away from Syria along with her sister saving themselves from the prying eyes of the terrorists, police and army. Both of them managed to travel through Damsakas, Beirut, Lebanon and Turkey. They wanted to go to Germany via Greece.
To reach to the coast of Greece they had to travel through a small boat. The boat was small, just enough to accommodate 6 persons, but almost 20 persons were boarded on to it. The luck was not in their favor. The engine of the boat stopped working in the middle of the sea and there was no one around to help. To add to their difficulty, only four persons, in the boat knew how to swim – Yusra, her sister and two men.
Four of them took a brave decision; they decided to pull the boat till the coast! It was about to get dark, the sea was stormy and the water was freezing cold. Soon the two men and Yusra’s sister got fatigued and they gave up. Yusra, didn’t. In that ice cold water, Yusra continued swimming for 3 hours and reached to the coast.
Grit is that ‘extra something’ that separates the most successful people from the rest. Yusra’s grit
saved 20 lives.

However, her troubles were far from over. Yusra had to reach Germany. She and her sister didn’t have warm clothes, no shoes. Yet, she didn’t give up. Both of them travelled through Greece, Serbia and Hungary to reach Germany, where she started living as a Refugee. 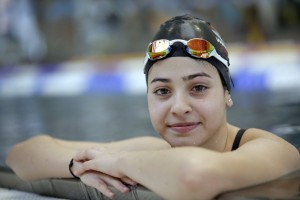 Yusra, however, had different goal in life. She wanted to become a swimmer of International level. She got in touch with a local person who could speak Egyptian and German and managed to get entry into a local Swimming Club. When the coach there saw her swimming skills, he just couldn’t say ‘NO’.
Yusra may not have won a medal, but she succeeded in capturing the hearts of the world with her incredible story.
It is rightly said that it is hard to beat a person who never gives up and indeed Yusra Mardini with her patience, persistence and perspiration has unfurled an unbeatable story of success.