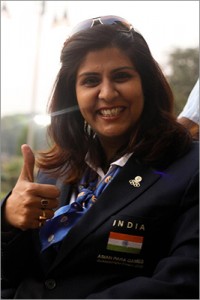 Deepa Malik on Monday created history by becoming the first-ever woman from the country to win a medal at the Rio Paralympics. She bagged a silver medal in the shot put F-53 event in Rio de Janeiro.

Her throw of 4.61m was the best in her six attempts.

Deepa is a paraplegic, paralysed from waist down and mother of two and wife of an Army officer. Besides shot put, Deepa has participated in javelin throw, swimming and has also been a motivational speaker.

She has also won medals in swimming at international competitions. She holds the Asian record in javelin throw, and also has World Championships silver medals in shot put and discus in 2011.