Shibi and Jainamma- The pillars behind SEAL

While most of us are familiar with the noble work that SEAL or the Social and Evangelical Association for Love, a Non Governmental Organization based in Navi Mumbai is carrying out for the destitute under the guidance of Pastor K.M. Philip and Pastor Biju Samuel, very few of us know about the two dynamic ladies who have been the pillars of support.

SEAL came into being in 1999 when an HIV affected commercial sex worker handed over her six months old child to Pastor Philip who had come to Mumbai just for a visit. It was later discovered that the child too was HIV positive child and that marked the inception of SEAL.

“While I was always moved by the plight of those living on the streets, I never felt I would stay in Mumbai on a permanent basis,” says Pastor Philip, who stayed in Kerala along with his wife, Shibi. During his stay, he visited the railway stations and the various streets of Mumbai.

“I was greatly moved to see the plight of people on the streets and at railway platforms. Many looked like skeletons and had deep wounds with maggots crawling all over them. Many were TB and HIV patients. It was agonizing to watch them pick up food from the dustbins. There were sick bodies, hungry stomachs, empty eyes, neglected souls everywhere. In one month I covered every bench of every railway station in Mumbai,” recalls Pastor Philip with moist eyes.

However, with the child, Reuben, in his hands, his commitment for the welfare, rescue and rehabilitation of the destitute was sealed and he stayed back in Mumbai. He was gradually joined by Pastor Biju Samuel in this mission.

When Shibi was informed by Pastor Philip of his decision, there was turmoil and great deal of hesitation in her.

“I was newly married and had three month old daughter when I came to Mumbai after Pastor Philip decided to stay here. I was shocked when I saw the mission that Pastor Philip had undertaken. With great reluctance I too joined in the mission,” says Shibi, wife of Pastor Philip. As there was paucity of funds and manpower, Shibi cooked meals for all the inmates single handedly.

“It was indeed a very challenging task as I had to handle my own daughter, Reuben and the other inmates too. Nevertheless, there was a sense of satisfaction and gradually I started enjoying cooking meals and looking after inmates,” says Shibi, who is fondly called ‘ma’ by the inmates.

Gradually Shibi was joined by Jainamma, who has been an active part of SEAL since the past 12 years. Recalling her association, Jainamma says, “Initially I got in touch with SEAL, when my son (Lijo 7 yrs) was hospitalized for Jaundice and Malaria. Doctors declared 72 hours for his life.  That time I had requested prayer support from SEAL Pastors and children. They all prayed for him with tears and God healed my son completely and he is now in good health and is now 19 years.  I came to thank everyone in SEAL personally that was my first visit to SEAL.” 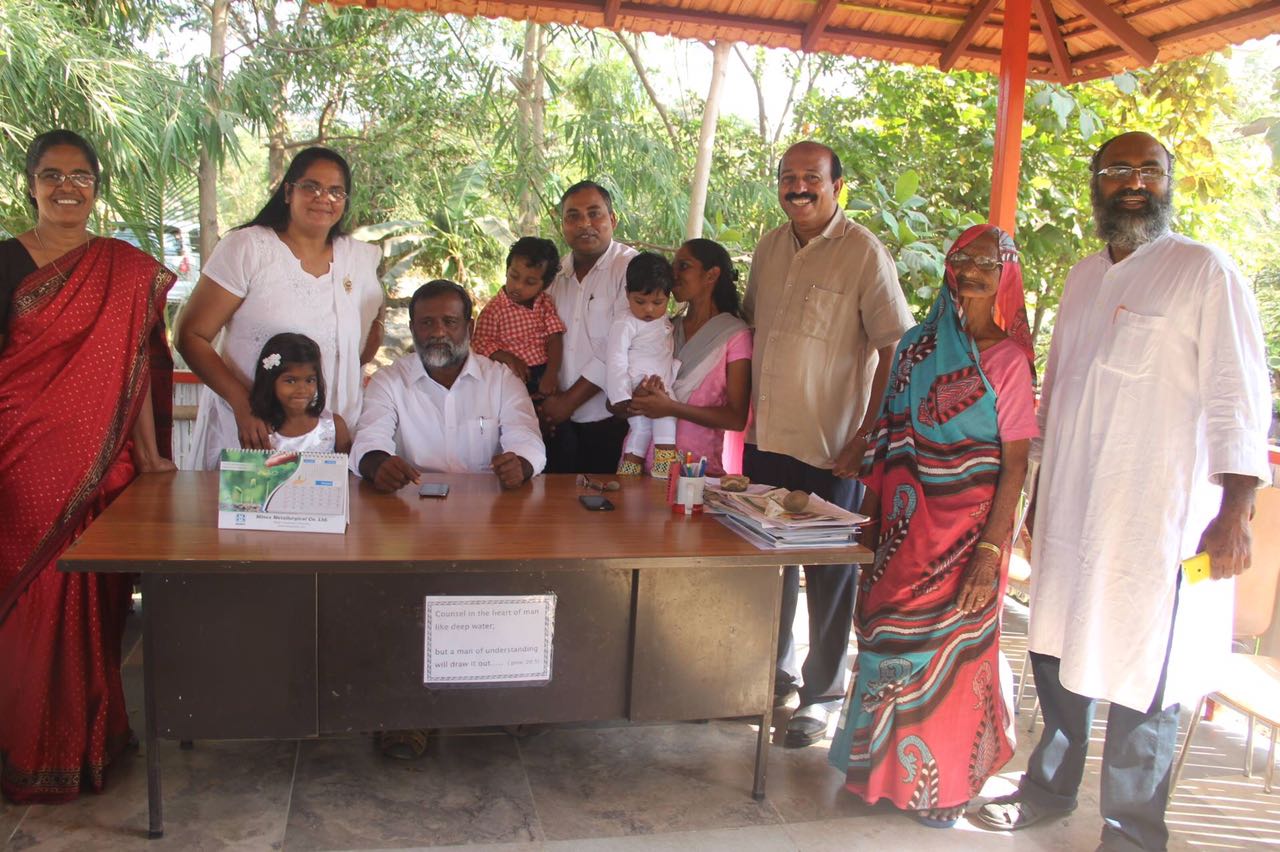 Later things went wrong in Jainamma’s family life and she was completely shattered. “I even went to the extent of thinking of ending my life along with the kids,” she adds.

Her cousin brought her to SEAL once again. Pastor Philip’s counseling and encouraging words gave a new direction to her life and since then Jainamma has become an integral part of SEAL.

“Initially I started to help the kitchen staff- washing plates for the guests who come to visit us. Then I realized there is no staff in office and Pastor Philip was taking care of the office work alone. 12 years I voluntarily supported and now I am working in the office full time, taking care of communication, correspondence, co-ordination etc.,” says Jainamma.

Recalling some of the touching moments, Jainamma says, “While there are many incidents that have left deep impression in my heart, one of the most touching moments was when Pastor Philip and Pastor Biju had gone to Kerala in the month of May 2009 to attend some family function and medication. I had to stay in SEAL Ashram. It is my habit to go to the lady’s section to meet children and ladies before I go to bed.  I hug them and shake hands. One day I got a bit late and to my surprise I found that even though they had gone to their bed, they were still waiting for me. This made me extremely emotional and my eyes were filled with tears of joy.”

For Shibi too, there have been numerous heart touching moments. “My eyes are filled whenever small kids come up to me and demand food or small toys. It is so touching to see their joy when their demands are fulfilled,” says Shibi with a smile.

SEAL provides shelter, food, medical care to 230 underprivileged people who are mainly HIV & TB, patients, mentally challenged, handicapped, visually impaired and fully orphaned. Under the love and care of the volunteers, these inmates are leading a meaningful life.

“In almost all the cases of rescue, the immediate help they expect is “not money”, but tender loving care including a wash, change of dress, water to drink, food to eat and hospitalization when required. SEAL is ever ready to take them into their fold and extend all possible assistance,” adds Pastor Biju. While extending help to all, the Ashram especially looks out for those who are seriously ill and needy. “On receiving call about someone lying on the road or uncared for, the volunteers from the Ashram rush to the site and bring them here,” he adds.

Besides giving them shelter, food and loving care, the most important mission of SEAL is to locate runaway children and vagabonds and reunite them with their families.

So far, 290 people have been reunited with their families. The first reunification was of 72 year old man, Ramachandra Sarvate fondly called “chacha” by inmates. He was lying on the streets for nearly 40 days, separated from his family members while on travel. He was reunited with his family in 12 days. Since then there have been more such happy reunifications with the families.

“We try to contact the relatives of the persons. Every word they say is kept track of and telegrams are sent to addresses mentioned. Reuniting those lost with their families is the highest reward for us,” says Jainamma.

Talking about the reasons why people especially children generally leave their homes and come to metropolitan cities like Mumbai, Pastor Philip says that in most cases it is poverty, higher aspirations, attraction about city life and family disputes.

“It is therefore essential to check the filtering points, especially for children, before they reach the cities. Once they reach cities, they are often misguided and end up in wrong places,” he adds.

The volunteers of SEAL also have a sense of satisfaction that they could provide a peaceful, mercy death bed and funeral / burial with dignity to 301 dear ones among the destitute who were at terminal stages and with fatal diseases.

“When death is at close quarters, all they need is someone to attend to their needs; someone to reassure them, someone to love them. They need the human touch, they long for care and compassion of loved ones. At SEAL we try to give them all that,” says Pastor Philip.

SEAL has no Government aid or permanent supporters from India or abroad and works solely on public individual donations. Hence, as it happens with most of the philanthropic organizations, shortage of funds is the major lacuna in expansion process. Nevertheless, SEAL, treading firmly on its path of providing accommodation as well as medical treatment and loving care to as many as possible, is undertaking many expansion projects.

“Mercy Mines building, a new shelter home is under construction. The present one cannot accommodate more inmates, hence, there was an urgent need to construction another building. The ground plus four building is in the final stage of construction,” informs Pastor Philip. The ground floor of this building will have a hospital facility “Snehadhoot Hospital” with 200 beds to cater to the needs of HIV/AIDS patients. SEAL also has plans for the tribal children of the area. Under its “SEAL Sagar Vidyapeet”, they aim to provide nutritious meal, tuition, school supplies to the malnourished tribal children.