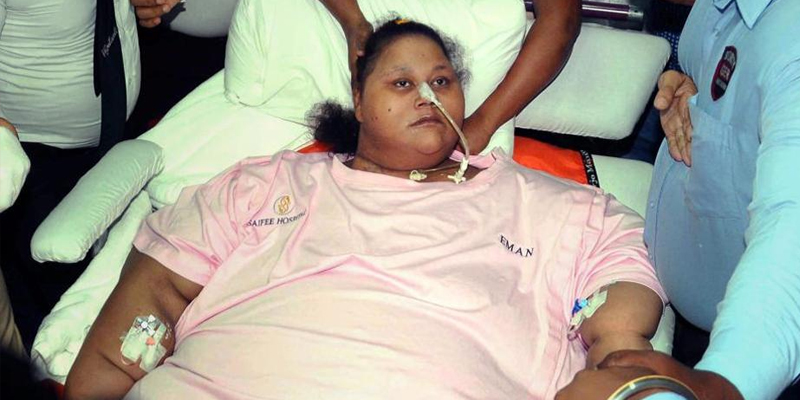 Once considered the world’s heaviest woman at 500 kg, Eman Ahmed, 37, died at the Burjeel Hospital in Abu Dhabi following multi-organ failure on Monday. Earlier, she had spent nearly three months in a Mumbai hospital before being transferred to the Abu Dhabi hospital in May this year.

Doctors treating her attributed her “sudden death” to a urinary tract infection and subsequent septic shock. She was diagnosed with the infection over six days ago. It led to septic shock that worsened her condition within 24 hours on Sunday.

Eman attracted global attention after she was airlifted from Alexandria to Mumbai in February for obesity treatment. She was then estimated to weigh 500 kg. On May 4, she was transferred to VPS Healthcare’s Burjeel Hospital for further treatment.

Eman was scheduled to undergo a series of surgeries in October, including liposuction, abdominoplasty and plastic surgeries to tighten flaps of loose skin around her limbs and stomach.

She was also undergoing physiotherapy for her hands and legs, to improve mobility, for the past several weeks along with speech therapy.

Eman was under the supervision of 20 specialist doctors, including a nutritionist, physiotherapist, cardiologist, neurologist, bariatric surgeons, anaesthesists, nephrologist and intensive care specialists. She was considered a high-risk patient with hypertension, paralysis, stroke, hypothyroid, respiratory distress, sleep apnea and renal malfunction.

The 37-year-old was bedridden for three years. In February, Eman was airlifted and brought to Saifee Hospital. She underwent a sleeve gastrectomy bariatric procedure to cut her stomach size by two-thirds.

She remained in the hospital for three months. Saifee Hospital claimed that her weight came down to 170 kg during this period.