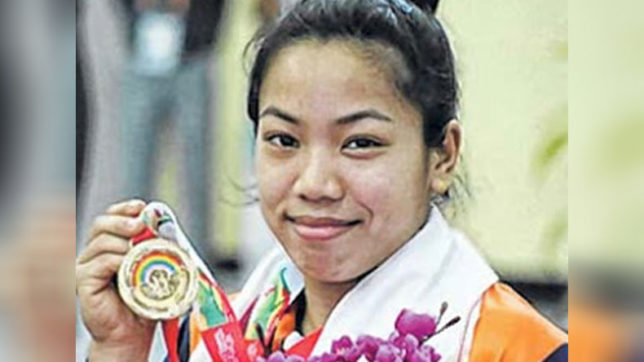 SNN:-  Saikhom Mirabai Chanu on Wednesday became the first Indian in over two decades to claim a gold medal at the World Weightlifting Championship in Anaheim, USA.

Chanu, who is employed with the Indian Railways, lifted 85kg in snatch and 109kg in clean and jerk to total an impressive 194kg in the women’s 48kg, in the process setting a new national record.

Chanu, with her lift of 85kg, came second in snatch but bagged the top positions each in clean & jerk and in overall total to finish with the yellow metal in a field of 20 lifters.

Thailand’s Sukcharoen Thunya won the silver medal with a total lift of 193, while Segura Ana Iris bagged the bronze with 182kg.

With a personal best of 192kg, Chanu entered into the competition as a strong medal contender and her quest for a gold medal was made easier by the absence of Rio Olympics 48kg gold medallist Sopita Tanasan of Thailand, who shifted to 53kg in this championship and China could not field any lifter due to a one-year ban for doping.

Chanu had finished ninth in the 2015 World Championships while she ended 11th in the 2014 edition.

In September, Chanu had booked a berth for next year’s Commonwealth Games after winning gold at the Commonwealth Senior Weightlifting Championships held in Australia. She had broken Commonwealth record in snatch event with a lift of 85kg, bettering her own record by a kilogramme.

Olympic bronze medallist Karnam Malleshwari had won the top prize in the World Championships twice — in 1994 and 1995.

Kunjarani Devi had also won several medals – mostly silver but never a gold — in the World Championships between 1989 to 1999.