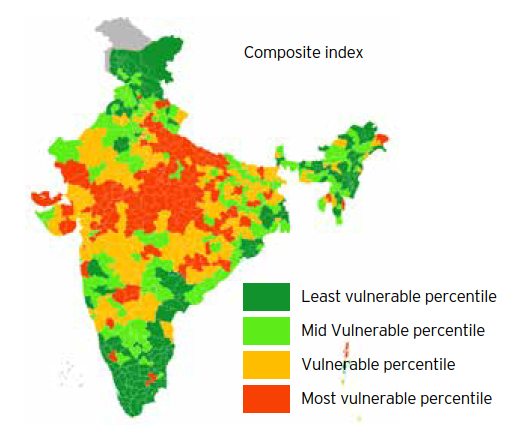 As part of the report – Child vulnerability: Can data help to identify “Children at-risk” – a Child Vulnerability Index has been prepared to identify the Indian districts that require maximum attention

Leveraging emerging technologies such as data analytics can help develop holistic child protection programmes, which can lead to reduction in child vulnerability across states in India, according to a latest report by EY titled – Child vulnerability: Can data help to identify “Children at-risk”.

To identify the areas within the Indian states that require maximum attention, EY has conducted an extensive research to prepare a Child Vulnerability Index (CVI) for Indian districts. The index has been developed using performance based indicators, related to education, health and crime against children. Each district is segregated into quintiles and districts belonging to the lowest quintiles, with least vulnerability, was attributed a green colour coding. Districts in the 25th to 50th percentile was attributed lighter green coding, while districts between the 50th and 75th percentile was coded orange. Lastly, districts belonging to the 75th to 100th quantile, with largest vulnerability, was coded red. The best performing districts (with least vulnerability) have a lower index nearing zero value and vice versa.

The composite CVI reveals that susceptibility, when measured using education, health and crime indicators, is concentrated in the central and western belt of India. The far south, north and north-east of the country display a relatively better performance, falling in the lowest 50th percentile for vulnerability.

“While there are programs and schemes related to children across various government departments including a National Child Policy, the execution of these programs is mostly done by separate agencies. The need of the hour is to have a common repository of information and linking different databases through technology, which can go a long way to develop more holistic programs in India.”

The CVI can be used by national and state governments to know the situation on-ground at different districts, and then accordingly take actions and frame policies targeted towards child protection that can have a long-term impact. Similarly, for NGOs, CSOs and donors, the index will provide a district-wise comparison that benchmarks progress and will identify next step reforms. The index will also provide a unified, evidence-based approach for advocacy and partnerships.

Niraj Seth, Associate Partner, Advisory Services, EY India, states: “At EY, we have developed a Child Vulnerability Index that will provide an as-is situational analysis at a district level of India, which will allow the government to form policies and target areas that require maximum intervention.”