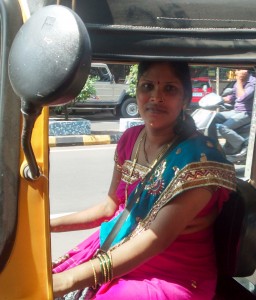 Draped in a Saree with a tailored khaki jacket, driving an auto rickshaw with confidence and élan, Sangeeta Takalkar, is one of the few women autorickshaw drivers of Navi Mumbai.

The city has 15,058 auto rickshaws cruising the city’s crowded streets. Sangeeta’s auto is one of those. Traditionally considered to be a man’s job, Sangeeta’s venture into this profession has helped in changing that perception to a large extent.

“I have never cared about what society thinks,” she says. “You can’t feed yourself if you follow society. For me driving autorickshaw is a passion as well as my bread and butter,” she adds.

For Sangeeta, to take up this profession was a great challenge as her conservative family did not approve of women working outside the home. But family circumstances forced her to take up odd jobs. She started earning money to support her family after completing her 10th grade. However, having an adventurous streak in her, Sangeeta always wanted to do the unconventional job i.e. driving.

“I had to stop my education post 10th class and support my family as we had financial problems. Being a girl, I was married away early. My personal life was miserable,” she recalls.  After the birth of my second child, I was abandoned by my husband. I did not have money or the education to support myself. All I had was the strength and determination to do something in life,” she adds.

After taking up few jobs, one fine day, Sangeeta decided to drive an auto. With the help of a distant relative, she started learning driving. “I picked up the skill very fast. And since five years I am driving auto and taking care of my family,” she says beamingly.

She currently runs a rented auto rickshaw from 12.00 pm to 12.00 am but hopes to buy her own auto very soon.

“I can pay off my rent with the money that I earn by plying auto and try to make both ends meet, but it is difficult.  Hence, I have to do additional work as I have to meet the medical expenses of my younger child who has neurological problem,” she says.

She says that despite this profession being largely male dominated, she has been supported and encouraged by her colleagues well. “There have been occasions when I faced problems with some of the male commuters but by and large, I am satisfied with my job,” she says. “I avoid belligerent passengers and if someone threatens me I simply act tough and rude,” she adds.

“Work is work, and if something bad has to happen, it can happen even if you’re sitting at home,” chirpily says Sangeeta.

Despite of her own problems, Sangeeta is always ready to support for a cause and does not charge anything from disabled commuters. She has even been awarded by Regional Transport Office for supporting physically disabled people.

Sangeeta is also the President of Lucky Auto and Taxi Association.

User rating: 0.00% ( 0
votes )
‘To work for the betterment of society is my dream’- Amarja Chavan Indian women may get a longer paid maternity leave