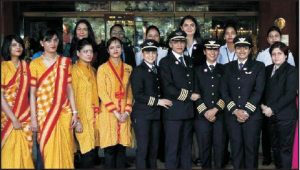 The flight travelled a distance of around 14,500 kilometre in close to 17 hours non-stop from Delhi to San Francisco.

Air India CMD Ashwani Lohani said it was a historic flight and “the longest operated by all-women crew”. “The airline has immense respect for women and it is a symbol of women empowerment,” he added.

The flight was under the command of Kshamta Bajpayee and Shubhangi Singh, along with First Officers Ramya Kirti Gupta and Amrit Namdhari.

User rating: 0.00% ( 0
votes )
Being creative is not a hobby but way of life for Vijaya Sharadha- Rangoli artiste Complementary feeding for your baby