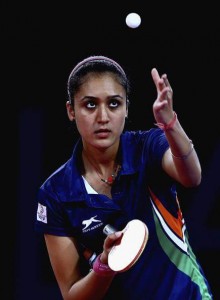 National Champion and Olympian (Rio 2016) Manika Batra of Delhi dethroned Madhurika Patkar of Maharashtra to clinch Women’s Single crown by 4-3 to maintain her status and top rank since last January. The players were competing in the National ranking central zone Table Tennis Championship being held in Indore (MP).

The final between Manika and Madhurika was a real thriller with Madhurika having an upper hand at the end of 3rd game as she led 2-1. But Manika bounced back by the next two levels score. Manika stroked well with her backhand and some brilliant execution of forehand.

In semifinal Manika had fully controlled the match against Divya Deshpande of Maharashtra and defeated her by 4-1.

In another Junior Girls Final, Moumita Datta of West Bengal beat Manusri Patil of Maharashtra by 4-2.  Moumita Datta played a superior game to her Maharashtra opponent and deservingly lifted the winner’s trophy.