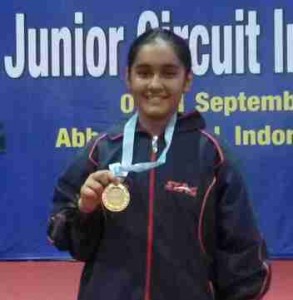 Hyderabad’s 15 year old teenager, Varuni Jaiswal, has come a long way from being a junior table tennis player to being a giant slayer. In the ongoing 11Even Sports National Ranking West zone Table Tennis Championship at the Veer Savarkar Municipal Corporation Stadium at Rajkot, Gujarat, Varuni added another feather in her cap after she defeated the former four times National Champion, the Common Wealth Gold medalist and regular team India’s most senior player, K. Shamini by 4-3  in a closely fought women singles pre-quarterfinals.

What was even more dramatic was that she was down 0-5 and then 3-6 in the decider. Temperamentally cool and discipline, Varuni never lost hope against seasoned Shamini and narrowed down the lead with the execution of her backhand drives and nice placements to go 7-6 up and then inched towards writing history. At 10-8 she missed a match point but recovered soon, when Shamini served, to shut her rival out at 10-9 as the 15-year-old eventually wrapped it up 11-9, 6-11, 11-6,8-11, 9-11,11-6, 11-9.

Varuni was also last month’s Gold medalist in International ITTF Indian Open held at Indore (MP). She beat Chinese Taipei player by 4-3 and had bagged first International Gold Medal. She is the regular Team India Player in Junior Girls and has participated in many International tournaments like SAF Games, Asian Junior etc.